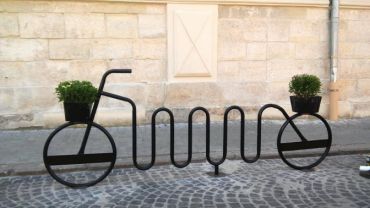 In many European countries actively switching from cars to bicycles, which certainly has some advantages due to the disturbed environment, local air pollution, and a lot of congestion during peak hours.

Its proximity to Europe once again proved Lviv: the city began to appear Bicycle and most inhabitants were massively change this environmentally friendly and healthy transport. This is due to the emergence and spread of bicycle paths on city streets.

A recently began to appear in Lviv space for bicycle parking. In conventional designs, there are three parking lots that attract attention with its original design.

Two of them set on Market Square , and the third - on the street. Theatre, near the area Jaworski. According to local authorities, increasing the number of people conducting veloparkovok promote healthy lifestyles, and therefore need to create conditions for the development of infrastructure.

In addition, at the intersection Lipinsky and Zamarstynivska lights appeared before special support for cyclists. These devices allow you wait for the green signal without zlizayuchy the bike and then push off from support and continue pedaling.

Also, you may be wondering:

Date: 10 August 2015
The British want to reconstruct the Potemkin Stairs
British fund which is engaged in restoration of cultural heritage, ready to finance the reconstruction of the famous Potemkin Stairs. The possibility of arranging passage under the stairs, which would connect the adjacent Istanbul Monthly and parks.

Date: 10 August 2015
Kyiv museum tells about the crimes of the Soviet era
In the capital of Ukraine will be a Museum of Soviet Occupation. There zvozytymut monuments Bolshevik leaders and other period artifacts totalitarian regime.
Feedback