In Kiev, a new Bicycle 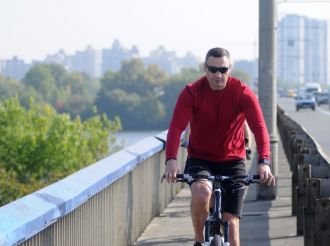 In Kiev, a new Bicycle route: from Troyeshchyna residential area in the city center, to the European area. He opened it himself mayor of Vitali Klitschko, proyihavshys velodorozi by bicycle. He noted that this is the first track in Kiev this level: it is dedicated to cyclists, cars there access denied.

Troyeshchyna - the capital`s residential area on the left bank, where more than 500 thousand. Residents. 22 km from Troyeshchyna to the center can be overcome to healthy and economically bicycle about half an hour. This is especially true when the frozen building long-promised government subway Troieschyna.

Those who do not own a bike can take it places BICYCLE. This requires a monetary deposit or payment document and the time of use.

Biking provides an excellent opportunity to make an unforgettable walk along Kyiv, look beautiful corners of nature, make it a lot in a short time.

Date: 06 October 2015
Fans can get lost in Pirogov
The Museum of Architecture and Life of Ukraine in Pirogovo, located on the outskirts of Kyiv, opened a corn maze - Labirudza. This corn field is an area of ​​six thousand square meters, corn stalks and a half meters tall, trails, covered with straw. Living...

Date: 05 October 2015
Автовокзал Мукачеве
г. Мукачево, H09
Czech operator will bring up Ukrainian passengers to trains
We are all accustomed to using buses plying on the route from the city to the airport and called the buzzword "shuttles". Similar flights - but by train - Ukraine has decided to organize a private railway operator LEO Express from the Czech Republic. Since...

Date: 04 October 2015
Lutsk Zoo
вул. Глушець 7, м. Луцьк 43000, Волинська обл., Україна
In Lutsk was bronze Kuzma
Recreation Area "City Park" in Lutsk, promises to become a place of pilgrimage for fans of the band "Skryabin" and its leader - Andrei "Kuzma" Kuzmenko. It was here on October 1 ceremony of the monument musician, TV host and social activist, to which parents...
Feedback