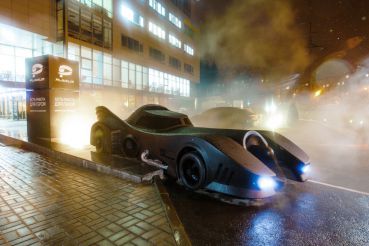 Residents and visitors of Kharkov have a unique opportunity to see the legendary superhero Batman`s car, which was presented on December 1st at the business center "capitalists". The unusual design of the car and its surroundings immediately attracted the attention of many residents. Auto is a replica Batmobile, which went to The Dark Knight movie series.

Brought cars at tow truck and installed at the entrance to kompniyi Plarium, which is developing computer games. Actually she initiated the establishment Batmobile. Creative Director Kharkiv studio Plarium Maxim Eremenko says it`s not just a whim fans of comics and fiction epic. He notes that Batman - is the only one superhero that has no supernatural possibilities, and only achieved all his mind and will. Thus proponents emphasize the importance of buying Batmobile and self-determination and believe that an unusual car will be an incentive for residents.

While the car is on the ground in front of the company. How many more will stand Batmobile is unknown, so hurry to take pictures with the legendary car no less legendary hero comics. Find the car you at m. Kharkiv, avenue Science (formerly Lenin) 27b.

Earlier, the media appeared information that in Kharkov seen aboard the towing vehicle, which is very similar to the Batmobile from the famous trilogy of The Dark Knight. But in early December held its official presentation.

You will also be interesting: