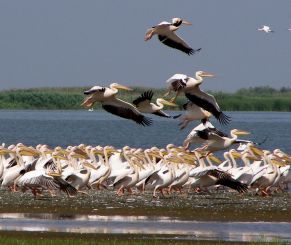 The Danube River takes its birth in the Black Forest mountain range in south western Germany, and, passing a dozen European countries, carries clay and sand to the Black Sea, forming in the village of Vylkove that in Odessa Oblast, a unique natural formation: kind of bays with islands are forming on the border with the sea. At the place where the river meets the sea, one can see a symbolic sign "Kilometre Zero". That's how the Kiliys’ka Danube Delta is forming. Each year, new islands are expanding and forming, thereby encroaching on the sea. This is a unique nature creation where you can meet more than five hundred species of plants and two hundred different species of birds. In 1998 the Danube Biosphere Reserve was founded. A year later, by a decision of UNESCO Romanian and Ukrainian lands were united into the International Bilateral Biosphere Reserve.

Due to its specific water area residents and tourists of Vylkove have no other choice but to travel by boat. You can see motorboats, ships and even cruise liners in modest Vylkove Seaport. Many tourists from Europe come here to enjoy the beauty of the Danube flooded areas and their inhabitants.

At the ranger station "Poludenna" there is a special 11-meter high observation tower, from where you can expect beautiful views of the Danube Delta. In the visitor centre and administration building you will find all the information about the reserve you need.

The Danube Reserve is a perfect place to enjoy the beauty of nature and wildlife. Stentsovs’ko-Zhebriyanovs’ki marshes are among the richest wetland areas. In the Danube Biosphere Reserve one can see both birds and waterfowl inhabitants: muskrat, river otter, European mink, raccoon dog, wild cat, pheasant, fox, hare, wild boar, raccoon, and many others. But the richest is the bird’s world, many of which are listed in the Red Book. Glossy ibis, mute swan, gray, red, yellow heron build their nests in spring. You will find colonies of terns, spoonbills, white and Dalmatian pelican, ducks, swans, gulls and cormorants, which are not in favour of local fishermen. Resourceful birds dive and get a catch from the tackle. Competitors, after all! Underwater world numbers 91 species of fish, including notably the largest freshwater fish – beluga as well as sturgeon, this is one of a few places of their natural spawning.

Islands, formed in the flooded areas, are covered with different kinds of willows, black poplars, buckthorn, and reed; however a riot of herbs is beautiful as well: Bessarabia pink, Dnipro feather grass, and fen-sedge. Also you can see other interesting islands made of white water lilies, fringed water-lilies, floating fern, and water caltrop; unfortunately it’s impossible to walk there, but what a pleasure to see this beauty, especially during flowering.

Visit the Danube Biosphere Reserve - you'll not be able to say enough in admiration of seen beauty!

What is the best accessible to the The Danube Biosphere Reserve from: