Feast of the Cross Church 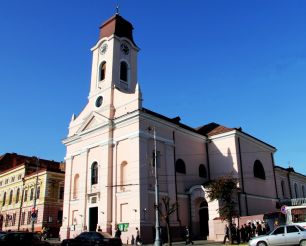 Roman Catholic Church of the Exaltation of the Holy Cross is the first stone church of Chernivtsi. It was erected by order of the Austrian Emperor Joseph II in the late 18th century. The amazing architecture of the temple, which combines baroque motifs and ancient Jesuit style, this place attracts a lot of tourists.

The history of the church dates back to 1787, when it was laid the foundation. However, over the years of building it constantly plagued with failures. So at the temple twice collapsing tower, was a large fire, during which damaged much of the building, and only 27 years later the church opened its doors to parishioners.

Guests who visit this beautiful temple, will be able to admire its walls and ceilings are covered with frescoes, stylized floral motifs. Also unforgettable impression located inside an old building authority. This musical instrument, with its superb tone, was voted the best in Europe. Do not leave it unattended and seven altars, executed in the Gothic Revival style.

The prototype of this church is the Church of Rome. All the interior of the church of the Exaltation of the Holy Cross in Chernivtsi styled European cathedrals. These policies are subject to not only painting, but also sculpture and temple arts and crafts.

In 1818, the tower of the church clock was installed, which changed several times by newer. Today, on the left side of the facade of the building are solar clock showing the time Vienna.

During the years of Soviet power door Exaltation Church were open to parishioners, and its original interior, almost intact, preserved to the present day. The last renovation of the building was carried out in 1910, since then the temple did not change its appearance.

In honor of the church and has been named the area, located nearby. Nearby you will see another landmark of the city - the famous ship-house. The house was built back in the 19th century, when the water in Chernivtsi was crystal clear, so the "prow" with a small fountain, in form resembling a lion. From the fountain can quench the thirst of everyone.

Roman Catholic Church of the Exaltation of the Holy Cross is located in the center of Chernivtsi, in the street of Beethoven, 2. To get to this wonderful place can be on any public transport or taxi passing through the center of the city.

What is the best accessible to the Feast of the Cross Church from: