Exaltation of the Holy Cross Monastery 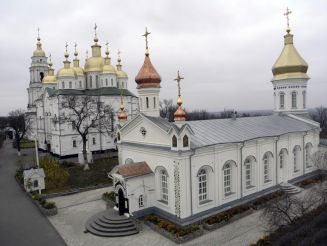 Exaltation of the Holy Cross Monastery is located on the hill above the Poltavka River in the city of Poltava. It was built in 1650 in honour of the liberation from the Polish gentry’s enslavement. The monastery was founded by Father Superior Kalistrat and financed by Poltava colonel Martyn Pushkar and representatives of the Cossack Starshyna – Ivan Iskra and Ivan Kramar. For a long times this temple was one of the most advanced cultural centres of Ukraine. Ukrainian poet Taras Shevchenko, Russian painter Grygoryi Miasoyedov and other cultural figures have admired the monastery’s beauty. Today, it is an architectural monument of national importance, which welcomes hundreds of visitors from all over Ukraine.

The greatest decoration of Exaltation of the Holy Cross Monastery is the main church of its architectural ensemble – Exaltation Cathedral, built in the late 17th century. This church with seven cupolas has no main and no secondary facades, as they all are architecturally sustained, and therefore are perfectly visible from all parts of Poltava. A few meters from the main temple you may see Trinity Church and Simeon Church. The last mentioned was built in 1887 in honour of the son of famous Poltava patron Inokentiy Kotel’nykov. They say, on the road to the place, where his sick son Semen had to take treatment, they stayed in Exaltation of the Holy Cross Monastery. The boy liked this temple so much, that asked his father to bury him there in case of his death. Soon his father had to execute the last will of his son.

The four-tier belfry of 50 metres high built in the style of Ukrainian Baroque is a part of the monastery complex and no doubts is worth your attention. Some artists compare it with the bell of Kyiv-Pechers’k Lavra, while admiring rich mouldings and ten magnificent bells. By the way, the biggest of the bells weighs over 6 tons!

On the territory of monastery complex you’ll see the monk’s building and the utility structure, as well as the house of prior. And in the first half of the 19th century within the monastery a cemetery was founded.

Recently Exaltation of the Holy Cross Monastery celebrated its 360th anniversary. It went through numerous pillages, destructions, and the Battle of Poltava. Unfortunately, unique iconostasis of the monastery's main church, made by famous masters Vasyl’ Rekl’ins’kyi and Sisa Shalmatov, haven’t been preserved till the present day. Historical and religious paintings went down the drain. They adorned the interior of the Catherine’s Hall, which completed the monastery in 1787 on the occasion of the arrival of Catherine II. Location of the Gospel and liturgical books of 16-18 centuries from monastery’s library remains unknown. However, each of the buildings, survived till the present day, can tell you much about the heroic events within its walls. It’s worth to see it.

What is the best accessible to the Exaltation of the Holy Cross Monastery from: