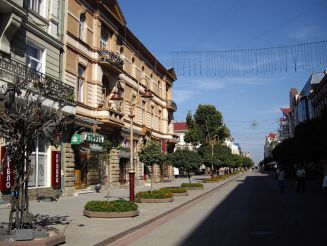 An interesting monument of architecture called "The banking quarter" can be seen in the center of Ivano-Frankivsk. Indeed, as it turns out, Banking quarters occur not only in Frankfurt, Geneva or Zurich, but also in Ukraine.

The building forms four houses that are tight to each other in the form of a square. These buildings can be considered one of the city`s business cards.

In the heart of the city, the glorious hundred meters long, one empty plot of land is probably just waiting for its architect. And finally in 1896 there began the construction of coffee, commissioned by restaurateur Henry Bass. It was the first of four buildings, which are formed Banking Stanislav old quarter.

For an elegant arcade of the ground floor located cafe "UNION" which was very popular with the citizens until 1912, when the old man died and pastry house sold mortgage bank. Its renovated, decorated with openwork second floor balcony. It is in the form of a mortgage bank can see this building on old postcards. Subsequently housed in buildings Bass branches of different banks, today is "Raiffeisen Bank Aval".

A little further hundred meters is located the so-called Leon Ґravera house that was built by engineer Jan Kudelsky in 1905. The house was inhabited apartments, and on the first floor - the company, among them the famous shop sewing machines "Singer", pharmacy, porcelain and glass store and a hair salon that can still remember frankivchany. Today it houses the main control architecture and urban planning, and the Customer Service Center Life :)

In the same 1905, at the corner of modern street Grushevskogo udynok was elevated to the Austro-Hungarian bank. This outstanding event not forget to mention in contemporary newspapers. "Courier Stanislavovski" writes that "a newly erected building branch of the Austro-Hungarian Bank city adornment. Its creator Ian Kudelsky matter can be proud of their hands and talent. "

With the change of State and varied institutions that occupy space at different times: after the Austro-Hungarian here hazyaynuvav Polish bank, then the State Bank of the USSR, the National Bank of Ukraine. And since 2003 the house was sold "Raiffeisen Bank Aval". Strangely, the story came back to where to started and Austrian bank started Austrian and completed.

And the neighborhood, at the corner of today`s streets. Hrushevskoho Shashkevych and in 1907 there was a beautiful three-story stone house, built by a doctor Apolinariy Lyahavets. Although this house has never been any financial institutions, he completed quarter and formed a bank in Ivano-Frankivsk, and not surprisingly, considered one of the architectural gems of the city. Today, here is the part of bank offices.

Whatever you might say, and rightly called the banking quarter.

A unique building in the city is the former Austro-Hungarian Bank. Interestingly, in its architecture experts are Renaissance features, shutters, columns, decorations reminiscent of Renaissance palace.

Buildings are in good condition, not counting a little shabby stucco. Although, like all historic buildings Ukrainian cities, Banking quarter suffered a problem with plastic windows and shop windows. A certain dissonance in view of making stone buildings and bright advertising signs

Getting the banking quarter Ivano-Frankivsk

Banking Quarter is located in the heart of Ivano-Frankivsk. You can easily see it on the right if ruhatymetesya Street towards Independence Square Vicheva. Or the train station by bus number 60, and a minute walk.

What is the best accessible to the Banking district from: