The Ensemble of the Historic Centre of L'viv 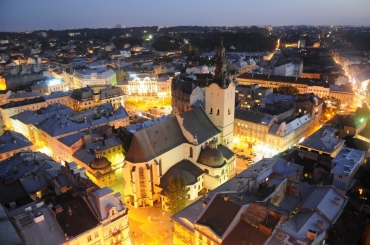 L’viv is one of the most beautiful cities in Ukraine. It is a place where you can feel European charm, enjoy its outstanding beauty and harmony. City life goes on its own ordinary life with majestic calmness and freedom. You might feel a special romantic mood walking along alleyways of L’viv. Refined houses, flowers on facades, bright and original shop-windows and cozy coffee-houses will be noticed by you. The central part of the city with its narrow streets covered with paving blocks create romantic and mysterious atmosphere.

Dating back to medieval times L’viv was an important trade center. The city is a great combination of cultural and architectural gems made by different people from Armenia, Poland, Germany, Italy and Austria, who settled L’viv many years ago. A large number of architectural gems create the Ensemble of the Historic Centre of L'viv, which is in a list of UNESCO World Heritage Sites.

For centuries Rynok Square has been the centre of trade and culture in L’viv. There you can find a market, which was visited by the Persians, the Turks, the Dutch, the French and the Russians. Different exhibitions, holidays and processions took place there. Your attention will be attracted by colourful houses in the style of Renaissance on Rynok Square: Bandinelli Palace, Lyubomyrs’ki Palace and Korniakt House as well. There is the City Hall with a high tower in the centre of the square. It is considered by many as a symbol of the city. You are well advised to go upstairs the City Hall, where you can expect a sweeping view of L’viv Historic Centre!

Once you have visited Historic Centre of the city, you’ll open a wonderful world of architecture for yourself. The city is a blend of Constructivism, Baroque, Classicism, Modern, Renaissance… You’ll be convinced L’viv is the city of majestic cathedrals. Dominican Cathedral decorated with sculptures in Baroque style is another place of interest worth seeing. Also you’ll be impressed with an architectural wonder – the Latin Cathedral. You might notice a chapel next to this cathedral. It is the Chapel of Boim Family. It is an outstanding architectural gem of L’viv, which has been preserved through many years. Chapel’s facade impresses with its sculptural decorations, ornaments and embossing. Its interior is wonderful as well. Come inside and look how highly every stone figure was made.

An architectural gem of L’viv is one of the most beautiful theatres in Europe – L’viv Opera Theatre. You might notice its interior decorated with gildings, colourful marble, sculptures and paintings.

Jesuit Church, Armenian Church and Dormition of Virgin Mary Church create atmosphere of former times. You’ll feel calmness and peace strolling along numerous lanes and courts. Mystery of such places always attracts many people. You might feel yourself as an adventurer, who goes on and doesn’t know what’s awaiting him… but suddenly you find an Armenian court in front of you… According to a beautiful legend, there was a beautiful garden on this place, where a quince tree grew. It was brought by the Armenians. Core of this fruit remained a cross. One of the citizens considered that as a God’s sign and built an Armenian cathedral. Also you’ll be impressed with another beautiful place – Italian court. It keeps a love story of Polish King Ian Sobeskyi and Maria Kasemir. White columns and balconies create a festive mood.

St Yuriy Mountain is a place where you can find a masterpiece of Baroque architecture known as St Yura Cathedral. It is the main shrine of Greek-Catholic Church in Ukraine. Cathedral’s interior emphasizes its significance: iconostases, Ukrainian embroiders and wonder-making icons.

Almost every house in the centre of L’viv is an architectural ensemble with its own history, legend or mystery. Once you have walked along cozy lines of L’viv, you’ll feel an unbelievably beautiful and fabulous atmosphere of medieval churches and cathedrals.

What is the best accessible to the The Ensemble of the Historic Centre of L'viv from: