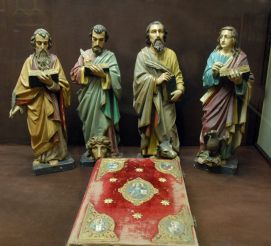 This unusual museum of Lviv delights at first sight. Exposition of the museum located in one of the most beautiful buildings in the city - the building of the Dominican monastery . The museum was founded in 1973. It houses more than 50 thousand. Pieces, which have historical and cultural value. Rare edition of the Torah, valuable icons of 16-19 centuries, Ostrog Bible in 1581 - one of a kind items that can only be seen here. Also particularly valuable manuscript collection Thor 15-19 centuries. In addition, interesting exhibits Buddhist culture, a treasure of gold coins of Napoleon III, cult objects of silver. The museum with rare exhibits devoted to Islam, Judaism, Christianity, Armenian and Greek Catholic Church. On Friday, Saturday and Sunday are organized organ concerts. Majestic pieces performed on the body, combined with the religious interiors create a charming, even mystical, atmosphere. About 150 thousand copies in the library of the Museum presents the history of religion. Many books are written in foreign languages, including Latin. Here you can see the books of theologians of the Moscow Theological Academy, the German Lutheran editions of the late 18th century, Croatian-Czech periodicals of the early 20th century, and much more.

What is the best accessible to the Lviv Religion's History Museum from: