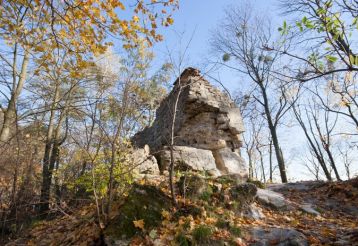 Castle Hill is one of the hills in the Ukrainian city of Lviv. This attraction is located near the historic city centre, which in former times used to be surrounded by fortifications. Between the 13th and the 19th centuries, the fortification known as High Castle was located on the hill mentioned above. After the castle was destroyed, trees have been planted on the hill and its slopes. The park was laid out there. In the early 20th century, on the site where the castle used to be located, Union of Lublin Mound was constructed. It was dedicated to the 300th anniversary of the Union of Lublin. The soil for the construction was brought from memorable places of Poland. Later the mound was faced with stone from the ancient castle walls. The fragment of the south wall with loopholes has been preserved till present days.

On Castle Hill, there is an observation deck, to which the spiral path resembling a labyrinth leads. Here you should expect a sweeping view of Lviv and even of the Carpathian Mountains in good weather conditions. Today, a television tower and a regional television centre are located on Castle Hill.

What is the best accessible to the Lviv Castle Hill from: