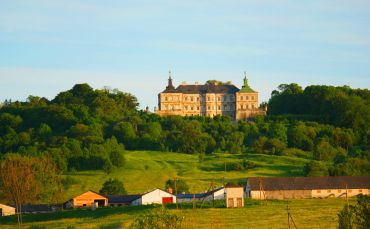 Pidhirtsi Castle is an architectural monument made in the style of Renaissance with bastion fortifications. Since the castle was built, many legends are retold all around the territory where it is located. It is said that the castle was built from assistance by a French military engineer Guillaume Le Vasser de Boplan for Koniecpolski Hetman in 1635–1640 years. There is a legend about the Rzewuskis and their reign in 1720's. It is a sad legend telling us about that Prince and he hated his wife, so one day he ordered to brick up her alive in the walls of the castle. Every year, on the day of her death, at midnight you can hear her cry on the ramparts. Another legend is about a mysterious alchemist Rzewuski. Some people believe that underneath the castle there are a lot of treasures and priceless works of the alchemist. Visiting this place you take chances to be invited down to the treasure house by his shadow. However, for some reason nobody dares...

This ancient castle has an interesting past. Castle’s flourishing dates back to the time of the reign of Waclaw Rzewuski, who was a great connoisseur of art. He has created precious collections of paintings, canvas, books, and weapons. A printing house, a theatre, and an orchestra were open during his reign; also different amusement took place there.

This land was also raided by nomads. Turkish-Tatar troops inflicted considerable destruction of the castle and devastated its territory, but this most luxurious magnate residence wasn’t destroyed. The castle also suffered heavily during the Second World War and during the fire of 1956.

To get to the castle, it was necessary to pass a large gate with two columns, which has been preserved till our days. Visit the castle! You will see an amazing Italian Park around it, which is considered a monument of landscape art of national importance. Ukrainian Cossack, Hetman Bohdan Khmelnytskyi has visited this park. Also, they say, a big tree used to grow there; it was so huge that it would need five people to come over it.

Pidhirtsi Castle is a big complex, which includes a wayside inn and a church built in the 18th century commissioned by Waclaw Rzewuski as a tribal burial vault.

If you are going to the castle by car, you should go on the road Kyiv-Lviv. About 15 kilometres from the town of Brody there will be a turn to Zolochiv. You also can use public transport. From Brody you can get to the castle by bus Brody-Zolochiv and go to Pidhirtsi Bus Station. The castle will be noted by you already from the station.

What is the best accessible to the Pidhirtsi Castle from: