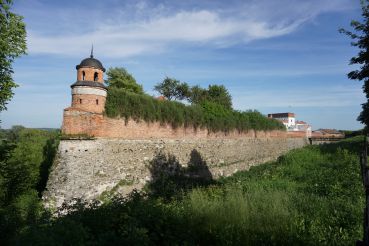 One of the most favourite touristic routes among tourists and travellers is Dubno Castle, located in the city of Dubno, in Rivne region.

This castle is famous for its impregnability as none of the Tatars, the Cossacks, the Russian Army or Swedish King could invade it for four centuries. The first fortification was built of wood by Prince Fedir Ostroz’kyi. At the end of the 15th century Kostiantyn Ostroz’kyi, the prince, ordered to erect a castle on the peninsula instead of this construction, washed by water all around. To be sure, they excavated a neck and let the river flow in it. In case of need a deep ditch dug up, was filled with water from the Ikva River. Originally, the castle was a property of Ostroz’kyi Prince, later it changed hands: the castle was a property of the Zaslavs’kyis, the Sanhushkyis, and the Liubomyrs’kyis. In the castle there was a founding workshop, where 73 guns have been made; three of which can be seen by you on the territory of the castle. In general, Dubno Castle is a complex of two palaces: the palace of the Ostroz’kyi Princes, where records and treasures were kept, and the palace of the Liubomyrs’kyi Princes.

Nowadays, museum exhibitions, including the exhibition “Skarby nashi dukhovni” are held in this ancient castle. You’ll have a unique opportunity to see origin exhibits. An unsurpassed sight is a sculpture of pregnant Virgin Mary, created by the great artist Pinzel’. Also you can see an ancient relic, a genuine bell of 1575, where ecclesiastical Slavonic figures are marked on, and a brass five-candlestick, for which original candles of one meter have been made.

Those who are fond of mysteries and adventures are well advised to visit castle’s dungeon. It is lightened only in some places, and it’s a little bit damply and frightfully there; only an ancient gangway plank rounds you. They say, earlier these caves served as a prison for an idle prince; being guilty, the lord was locked there by his wife.

Each castle has its legends with secrecy, mysteriousness, romanticism. Dubno Castle has its own interesting legends too, and one of them is about beautiful Beat, a niece of Prince Ostroz’kyi, who stood a siege of the Tatars by herself. During the raids of enemies, the girl went towards a bastion and made three shots from the cannon; one of them hit the leader of the Tatars. The army of invaders moved back, since the shot killed their chief. Since then one of the castle’s cannons bears her name - Beatka.

What is the best accessible to the Dubno Castle from: