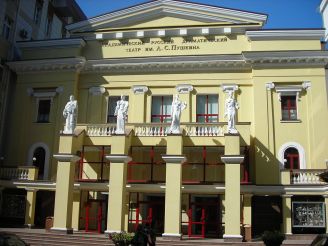 One of the main Kharkiv attractions is the Alexander Pushkin Kharkiv Russian Drama Theatre, which is located in the heart of the city, on 11, Chernyshevs’koho Street.

The theatre was founded in 1933. Its first stage director was People's Artist of Soviet Russia Nikholai Petrov, with whom most members of the Leningrad Drama Theatre troupe continued in the Kharkiv Theatre.

The publishing house, where collections of articles, books, as well as the weekly newspaper Teatr Rosiys’koi Dramy have been published, used to work under the theatre. The Theatre Club of Art Workers was famous thanks to recitals arranged there.

During the Second World War, the troupe was evacuated and continued its work in theatres of Ulan-Ude, Irkutsk and Khabarovsk. In 1949, during the celebration of the 150th anniversary of the Alexander Pushkin’s birth, the theatre was named after this famous Russian poet.

The theatre achieved renown thanks to its first performances, put on the stage by works of Nikolai Gogol, Alexander Griboyedov, and Anton Chekhov. In 1971 it was awarded the honorary title of “Academic”. In the 1970s, at the initiative of Alexander Barsyhian, a stage director and People's Artist of Ukraine, performances became more modern, with strong-willed temperament and civic pathos.

Actors of this theatre are professional masters of intellectual and psychological performance styles, as well as high scenic culture. Visiting their performances, you will definitely be filled with the acting and learn new faces of a human soul.

Over the years of its existence the theatre has successfully toured many cities of the country and abroad, where it acquired a large number of fans and earned the respect of professionals. Striking and memorable performances of the theatre will impress you: Decameron by Giovanni Boccaccio, Macbeth by William Shakespeare, comedies by Anton Chekhov, Memorial Prayer by Grigory Gorin and many others.

In 1978 the theatre was badly damaged by fire, after which the building required major repairs. In 1993, the restoration of the Kharkiv Academic Theatre started and in 2003 a new theatre building was inaugurated. Today, attention of its visitors is attracted by a new beautiful facade, a renovated auditorium and a luxurious lobby. In addition, the stage was completely modernized during the renovation. Thereby this new theatre building is a great combination of old traditions and modernity.

You are well advised to visit the Alexander Pushkin Kharkiv Russian Drama Theatre, one of the best examples of Ukrainian theatrical architecture. You can get to the theatre by the subway train to Arkhitektora Beketova Station or Istorychnyi Muzei Station.

What is the best accessible to the The Alexander Pushkin Kharkiv State Russian Drama Theatre from: