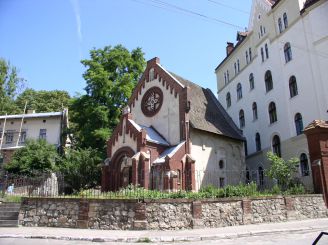 Caught in the historic heart of the city, on the Old Market Square , you will certainly stop in front of the church of St. John the Baptist, to admire the oldest architectural monument of the city.

The temple, built in the 13-14 centuries, will surprise you with its architecture in the Romanesque style. At one time he had been rebuilt several times. First belonged to the Order of Dominican Friars, then the building was given to the Armenians-unitary.

Now, if you go into the church, it will be taken to the Museum of the oldest monuments in Lviv, which has long been in the building. The most valuable exhibit - the icon of "Lviv Virgin", which dates from the mid 14th century.

The decision on the placement of the museum authorities decided, after hearing the findings of archaeologists. As it turned out, long before the appearance of Lviv on this place before there was a settlement of the Slavs. You will have the opportunity to explore the archaeological finds, learn more about the crafts of those times, the national life and the birth of the city.

What is the best accessible to the Church of St John the Baptist (Museum of the Lviv Oldest Monuments) from: