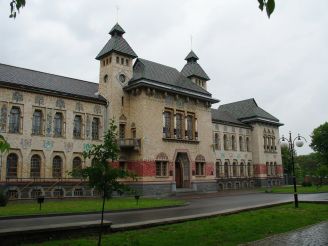 Poltava Regional Museum is one of the oldest museums in Ukraine itself. It was founded in 1891 on the initiative of Professor Vasily Dokuchaev. The museum is located in a historic building, which was previously the provincial district council. The structure of the Ukrainian Art Nouveau style, was built by the architect Vasily Krichevsky. A distinctive feature of the building is the traditional folk ornaments made on its facade. The central part of the building is decorated with coats of arms of the cities that make up the province of Poltava.

The first tier is decorated with a magnificent three-story mansion rare pink granite. Ceramics and majolica decorating the facade, were imported from Mirgorod and Oposhnya . The main symbol of the museum is the tree of life, cut straight to the front door.

All museum visitors pay attention to the beautiful murals on the walls of the lobby and the central hall, which had been made known Ukrainian artist Nikolai and Sergei Samokish Vasilkovsky. In the museum there are three large canvases them located in the boardroom of the Zemstvo, "Romodanovsky Milky way," Kozak Golota and Tartar "and" Election Colonel Pushkar. "

To date, the museum has more than 300 thousand exhibits. All of them are available in several departments: archeology, nature, ethnography and history of the late 14th-early 20th century. The museum`s collection includes more than three hundred and sixty carpets, one hundred fifty five Plahtiy, many items numismatics, embroidery, towels, pottery and other valuable materials. In the museum you can see the personal belongings of the representatives of the Cossack officers, doctors, writers and other prominent figures of Poltava. Particularly noteworthy historical relics such as the versatile Ivan Mazepa and a diploma with the personal signature of Kirill Razumovsky.

Through the efforts of the museum staff, a new exhibition entitled "Treasury", which stores the unique items, extant since the days of ancient Roman, Greek and Egyptian civilizations.

Considering the museum exhibits, enjoy a unique collection of ancient folk art and everyday life. In the Poltava region collected antiquities brought from all over the world: Egypt, Japan, India, Indonesia, China. The real pride of local history museum considered Cossack rarities, keeping the spirit of independence of the Ukrainian people.

By visiting this amazing place, you will plunge into the world of these masterpieces. The museum is located in the heart of Poltava . You can reach it at any taxi or public transport, walking through the city center.

What is the best accessible to the Poltava Regional Museum named after Krychevsky from: