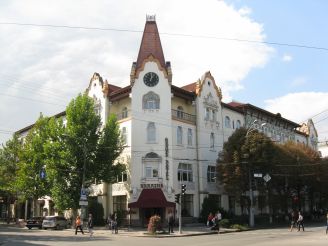 The five-star Grand Hotel Ukraine is situated in the business centre of Dnipropetrovsk on Karl Marks Avenue, the main avenue of Dnipropetrovsk. It is only a few minutes’ walk from main administrative buildings, town museums and theatres, big shopping-malls and popular restaurants. The Grand Hotel Ukraine stands out from other buildings situated nearby due to its interesting architectural solution.

The building itself was built in 1912 by an oligarch and Katerynoslav patron – Vladimir Khrennikov. In that way he wanted to rebuild his one-storeyed house into four-storeyed tenement building. The project for the new building was created by the Kyiv architect Peter Fetisov and was later completed by the ethnographer and historian Dmytro Yavornytsky.

The building was architecturally beautiful. There was a dome placed above the façade and huge doorways as well. The front of the building was beautifully decorated with coloured tiles and ceramics. Hexagonal windows, multitiered small towers with spires remind of the architectural style of Zaporozhian Cossacks’ Times. Red tile roof stands in contrast to white walls. Originally, images of a horse, quiver and falcon could be seen on its spires. The wind vane was adorned with figures of a Cossack and a Tartar. Colourful majolica has been preserved under the roof of the hotel. People couldn’t help admiring the building’s interior. Huge metal chandeliers in the shape of old ships typical for the times of Kyivan Rus’ were situated in the theatre auditorium. The new house was the reflection of the Ukrainian culture of those times as it combined two architectural styles: Ukrainian Baroque and Art Nouveau.

The house had three wings. Till 1917, the Cinema Hall Palas was situated in one of the wings. The entrance of the cinema was lighted every evening. The citizens of the town came there to enjoy different performances and shows of well-known touring artists. After the civil war, an art museum was placed in the Khrennikov’s house, and a lot of provocative performances took place on the stage of the Palas. During the time of the World War II, a casino and the Victoria Cinema for German commissioned officers were opened here. When the war was over the building was in ruins. It was reconstructed only in the 50-s and the Ukraine Hotel was opened there.

Now the hotel inspires street artists who present and sell their works of art on the avenue right in front of it. The Grand Hotel Ukraine is still one of the main sights of Dnipropetrovsk.

The hotel is easily to get to, as it is situated in the very centre of the city. From the railway station you should take No 1 tram or the route taxies No 101, 123, 146A, from the airport you can take the route taxi No 109.

What is the best accessible to the Hotel Ukraine from: