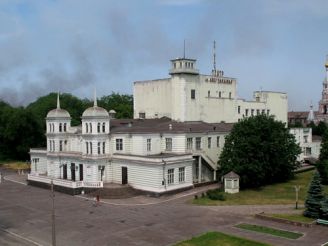 Academic Music and Drama Theatre. Lesia Ukrainka in Dnipridzerzhinsk located in one of the oldest and most beautiful buildings in the city - the former People`s audience, which was built in 1900.

Within these walls, in 1935 opened the first professional theater Dniprodzerzhyns`k - Theatre of Russian Drama. Shevchenko. Since 1993, on the basis of the musical-drama theater festival works "Classics Today" during the years of its existence, has reached the international level. Today the theater continues to thrive. His repertoire has about 40 plays of various genres - musical comedy, Ukrainian and foreign classics, drama, children`s shows, classical music concerts and concert programs. Theater box office is open daily, from 10 to 17:30, Friday - 19:30. Book tickets on the website of the theater.

What is the best accessible to the Dniprodzerzhynsk Academy Mussical Drama Theatre named after Lesia Ukrainka from: