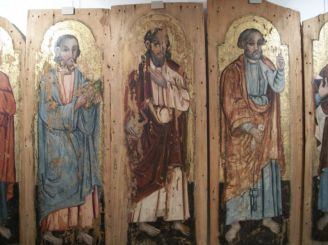 Museum of Volyn Icon - the only museum in Ukraine similar profile. He is quite young - opened in 1993. In eight halls of the museum assembled an amazing collection of more than a thousand exhibits, rare and ancient icons, sculptures, decorative carving church, crosses, crucifixes, and many other sacred objects of art.

The most valuable and famous exhibit of the museum is the miraculous icon of the Mother of God of Chelm. The real origin of the shrine is still unknown. According to legend, it was written in Jerusalem by the holy Apostle, St. Luke, and in the 11th century brought to Rus Prince Vladimir. Chelm began to call her because she was a long time in the hill town - the capital of Volyn-Galician principality. On account of the shrine many miracles, one of which happened recently: four recumbent boy, whose grandmother several times brought to the icon and prayed, and began to walk. Today, to the healing way of pilgrims come from all over the world.

The museum contains a truly unique collection of icons Volyn artists. The manner and the ability to combine different styles become the hallmark of the local painters. Their works are endowed with unique energy, and some are considered miraculous and known far beyond Ukraine. The museum also houses a collection of masterpieces of the outstanding Ukrainian master iconographer - Job Kondzelevicha, among them a place of honor is occupied by the famous "Christ Pantocrator", "Saint George", "Yuri Zmeeborets."

The museum also holds thematic exhibitions and presentations, concerts, chamber music and spirituals. Plunge into the world of the rich sacred guides help visitors of the museum.

Through the avenue of the museum is the Holy Trinity Cathedral , a little further spreads large city park with "Bird grove," and after him - the famous castle of Westminster Cathedral and St. Peter and Paul.

What is the best accessible to the Volyn Icon Museum from: