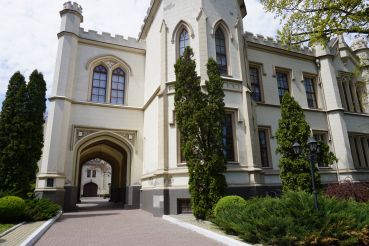 The main decoration of any queen is a crown. For Gogol Street became a crown Shah`s palace, designed in the Gothic Revival style and resembles rather a medieval castle.

Shah`s palace, really stands out from all the other mansions and immediately catches the eye. Unusual appearance construction obligation Gonsiorovskiy Polish architect who created this masterpiece for his countryman nobleman Brzhozovsky. Castle in the style of English knights, most likely a reflection of the nature of their hosts, which is marked by isolation and alienation. Therefore, the Shah`s palace with its impregnable walls, as it were shielded from the outside world, hiding all the secrets and details of the personal lives of its inhabitants.

Its present name of the palace was due to present the Shah, who had to flee after the political upheaval in Iran. Odessa impregnable castle was the best refuge for former Eastern ruler. In contrast to the previous owners, Mohammed Ali different fun and cheerful disposition. The generosity of his soul was able to conquer the inhabitants of Odessa, who has since been called the palace only as of the Shah.

It is striking that for nearly two centuries of its existence, externally Shah`s palace is actually not undergone any changes. Of course, its rich interior decoration with marble fireplaces, parquet floors and did not return, but he is still the decoration of Odessa - the pearl of the sea.

What is the best accessible to the Shakhsky Palace from: