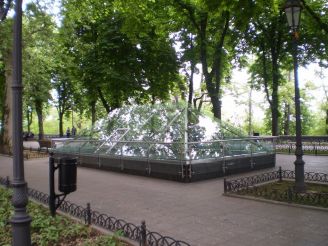 For the first time seeing the sparkling glass dome, towering on the Promenade, immediately ask a question about the appointment of construction. Through the transparent shell could be seen ancient artifacts stored underground.

This interesting object - the remains of the ancient Greek settlement existed here in 5-6 century BC. All items that can be seen in the original open-air museum, were found during excavations in 2008. The fact that people from Odessa, hand in the reconstruction of the boulevard, suddenly stumbled upon ancient finds. Archaeologists began excavations and removed from the earth amazing exhibits.

Under the boulevard there are ritual pits containing the remains of animals that were sacrificed, and the foundations of the ancient Greek settlement. Historians believe that before it housed the Greek harbor, which is the name of the Istrian nose mud. Today, stopping at the dome, every passer-by can see the objects that were used by Greek settlers.

What is the best accessible to the Greek Settlement Excavation from: