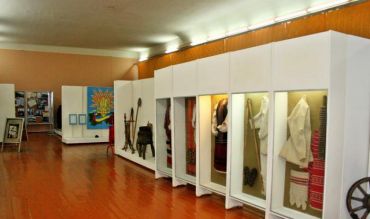 Local History Museum in the village Ivankov - another excellent representative of regional museums Kiev region.   The exposition of the museum is devoted entirely to the history and culture of the town.   A large number of exhibits in more detail reveals the theme of the Chernobyl tragedy, because Ivankov is in the vicinity of Pripyat.

The museum was founded in 1980 as a regional museum. The museum exposition is divided into 5 different topics, open the exhibition of portraits and paintings by local artists, shows the fauna and flora area exhibits the pre-war period, the history of the Second World War, the Chernobyl disaster, modern Ivankov.

Museum - is not the only object of culture in the town. When entering the city from Kiev the memorial to the victims of the Chernobyl disaster, a monument to "Call of Chernobyl", sign in honor of the 400th anniversary of the village, opened in 1989.   Ivankov - a city rich in history, he has something to tell, and the best place to explore - it Ivankov historical museum.

What is the best accessible to the Ivankov historical museum from: