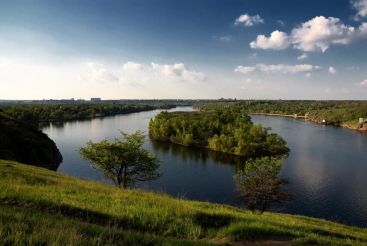 Zaporozhye Bayda island remarkable for its ancient history. This Bronze Age people lived, ancient and Cherniakhivska culture, the era of Kievan Rus. It is worth noting that the island is not always wore its present name.

At various times it was called then Khortytsya Malaya (because of the location between the island of Khortytsya and Baburka), the Hetman, the funnels, then Verhnohortytskyy (or Cherry Khortytsya), the viper. The current name attributed sometimes Cossack Baida, which built on a small island (about 570 m long and 160 m wide) derevozemlyanu building, which later received the name Khortickiy castle. Name Khortytsya was as small as the most appropriate: an island entirely repeated not only outlines Khortitsa, but the location of landscape areas.

History buffs interested in the island of Baida remnants of fortifications during the Russian-Turkish war in the northern part of the island. Below are the remains of the fortifications of the same Khortickiy castle-fortress, built Baida. At least three centuries ago the island had an area three times larger than now. Southern, which had, unlike the northern, protection in the form of rocks, was washed by floods; made their adjustments and flooding characteristic of these places.

Today the northern part of the island of Baida is a steppe, and southern - thick shady forest. The island is a tourist base and sandy beaches.

What is the best accessible to the Island Bayda from: