Church of the Resurrection, Zbarazh 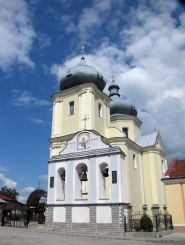 Ternopil region is famous for its temples. One of them - this is the Church of the Resurrection in Zbarazh. It is an architectural monument of local importance. Bright stone church cruciform shape in the late Baroque style was built in the mid 18th century. Laid the church tradesman Gregory Gimonyuk who died suddenly and was unable to finish the building. But his case was brought before the end of the Count Nicholas Potocki.

In 1887 there was a fire in the temple: burned roof, the interior was heavily damaged. The church was reconstructed, and its original form has been changed. Was attached to the western facade bunk belfry. Another was the shape and the central dome.

In Soviet times, in this holy place sounded prayer - in the 60s here staged a warehouse. Returned to the faithful church in 1989. It was restored again, and now here is going to worship Greek Catholic community.

Near the Church of the Resurrection is another interesting temple that worth seeing - Bernardine. And there, across a small river - famous Zbarazh castle .

What is the best accessible to the Church of the Resurrection from: