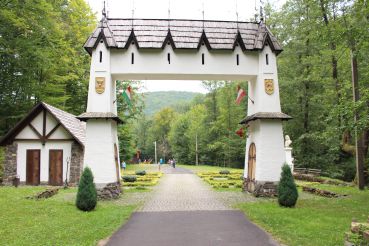 Park Earl L. Schonborn   located in the tract of Vojvodina   that in the Transcarpathian region. Parkland takes quite a large area in the valley and Turyanska   access to it is most convenient to raft across the lake.

Entrance gate to the park are a symbol of the intersection of two eras - the Austro-Hungarian and the current Ukrainian.   Vintage gate built on the remains of the foundation of the building of the 18th century. L. Schonborn Park is in a beautiful mountain area, near Lake Tour.   All the elements of its architecture endowed with a certain symbolic significance.   Celtic garden is still preserved calendar druids, and the lake is still working mill St. John.

Park restored in 2013 with the money of the local patron S. Moshak. Timed to the restoration of the 285 th anniversary of the transfer of land Carpathian Austrian emperor Earl L. Schoenborn.

Count Schonborn Park - a wonderful place that deserves the attention of tourists and lovers of beautiful corners of the earth.

What is the best accessible to the Count Schonborn Park from: