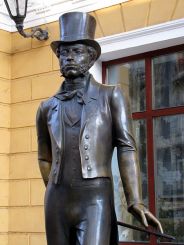 The monument to Pushkin is 1999. The sculpture was erected in honor of the 200th anniversary of the birth of the famous poet. The name of a picturesque part of the town was given in honor of the house where the famous writer lived during the 13-month reference in Odessa . In this house in 1823 Pushkin lived, immediately after his arrival. Where the hotel is located a few dozen rooms. A writer at the time was only 24 years old, so he is depicted on the monument-sculpture.

The author of the project was V. Glazyrin, a brilliant performer and sculptor made Tokarev. The protagonist portrayed fashionably dressed young man with a well-recognized cylinder and cane in hand. Legendary cane several times falls prey to unscrupulous citizens. The precious material bronze from which made the monument, repeatedly beckoned hunters non-ferrous metals. Fortunately, the next anniversary of the author has created a new stick of steel material, tightly attached to the construction of the sculpture. A monument in front of the facade of the house directly on the sidewalk, where it is often a stroll Odessa. Nearby is worth visiting the original monument to Isaac Babel .

What is the best accessible to the Pushkin monument sculpture from: