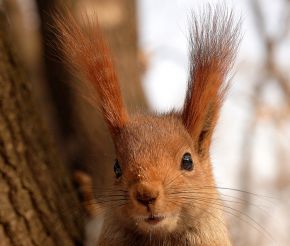 Pyryatynsky National Park - one of the youngest parks not only in the Poltava region, but throughout Ukraine. It was created by 11 December 2009 at the initiative of President Viktor Yushchenko.

Despite his young age, the park has the status of conservation, research, cultural and educational organizations. Natural Park is in the northwest of the Poltava region, where lie several major highways of the country and the railway line. Through the park and proceed three rivers: Uday, Ore and Translation, which divide it into several sections. Its total area is over 12 thousand. Ha.

Natural Park in Piryatin - a surprising beauty landscapes, which again and again attract tens of thousands of tourists from all over Ukraine and abroad. On its territory you can find rare species of plants and animals unique to hear the birds singing and simply breathe the crystal clear air.

The park all visitors have an amazing opportunity to observe the life of its inhabitants in their natural habitat. On such a large area at the same time there are tens of species of animals: mammals, amphibians, artiodactyls. In rivers floats several species of fish and other inhabitants of freshwater. Among the representatives of the bird family in the park there are finches, robins, thrushes, rattles and others.

In the park is quite well developed modern tourist infrastructure, there are specially designed travel routes. Also in the park are working professional guides who tell visitors about the most important attractions of the park and its inhabitants. A walk in the natural park Piryatin - a real energy boost, a lot of positive emotions and good mood.

The tour route "Kukvyn" small - takes about an hour. This nature trail has a length of about one kilometer and passes the ring road through the woods and cover the locus of many plants listed in the Red Book of Ukraine.

In the route includes the following parking lots:

In addition, the territory Pyryatynsky Natural Park has many other educational tours and routes.

To date, the park is protected and is a national treasure.

What is the best accessible to the Natural Park Pyryatynsky from: