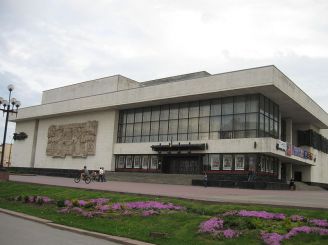 One of the places that should definitely visit while vacationing in Ivano-Frankivsk, is the Regional Ukrainian Music and Drama Theatre. Ivan Franko.

1939 was a turning point in history. The whole world was embroiled in World War II. But cultural life continued, and Ivano-Frankivsk (Stanislav then) was no exception.

Years of war in the theater associated with the name of Strauss. People are happy to go to the "bat" and "The Gypsy Baron".

The period from 1979 to 1993 and is considered the most prolific in the history of drama theater. While Drama was led by Irina Zheltonozhsky, and became the chief director Igor Boris. In 1982, there was on stage Drama up 14 Premier. So the creative team of the theater celebrated the transition to a new building on the street of Independence. In the same period the first time in Ukraine was put Anton Chekhov drama "Ivanov" and Kotsiubynskyi story "Shadows of Forgotten Ancestors".

Drama Theatre in Ivano-Frankivsk became the first theater of the Carpathians, which managed to perform at the legendary Theater stage.

In 2011, the first group had a tour in the US and Canada. Director Rostislav Derzhypilsky and Drama corpse was taken in North America play "Sweet Darusya" (on the novel by Mary Matios).

At the theater put both classics and works by contemporary authors. For example, it should go to the drama of love "Soychyne wing" by Ivan Franko. Look at the performance "On Sunday morning potion dug" by Olga Kobylianska and find out how great a price paid for the betrayal of the heroine tragedy.

Also on the stage of the Ivano-Frankivsk dramatic theater pieces put writer Maria Matios. For example, the book "Nation" on which the drama of the same name set requiem written based on real events. Another piece cult of Mary Matios - "Almost never reverse" on the stage set theater artistic director Rostislav Derzhypilsky.

Getting to the Theatre

Drama Theatre is in the street Independence, 42 (near the memorial park).

What is the best accessible to the Drama Theatre from: