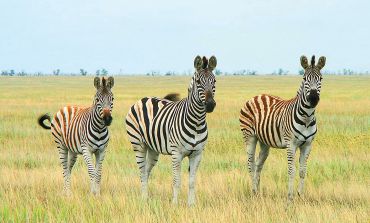 To the South of Ukraine, a wonderful piece of the nature, the only first-formed steppe land in Europe, never before worked up by a man, is situated in Kherson Oblast. It is the Askania-Nova Reserve.

It was founded by a German landowner Friedrich Falz-Fein in the end of the 19th century. The German landowner used a pasture area to create a protected territory with unique animals and birds. The news of this great zoo spread throughout Europe. In 1914 the Russian Emperor Nicholas II visited Askania-Nova. He stayed at the Frederick’s house and was told many interesting stories about the unique reserve and breeding of rare animals. The Emperor was impressed with beauty of this area, and how deer, kangaroos, goats, ostriches, antelopes and other animals live together. Later, in a letter to his mother, Nicholas II wrote: "An amazing experience, just a picture of the Bible, like animals came out of Noah's ark”.

Today, the Askania-Nova Reserve is much larger, occupying an area of ​​33.3 thousand hectares. The reserve includes a zoo, a steppe zone, and an arboretum. Those who love wildlife will like wonderful steppe, where they can feel rich diversity of plant scents. All seasons in steppe are remarkable for their unique colours being constantly changing. In spring silver feather grass waves gently twinkling in the sun, fescue colour in dark, red tulips burn bright, blue-purple hyacinth seductively attracts, and daisies turn gently white. When Austrian flax blossoms the earth is covered with a light haze.

In the reserve you might notice kind of oasis – the arboretum, which includes an old botanical garden, a forest-steppe zone of oak and a new park. Guides will show you touristic routs so you could walk shady alleys under the crowns of old trees. You’ll see clearings with spruces and a beautiful pond with an island, home to beautiful swans.

The reserve is full of life 24 hours a day. You’ll be impressed how many different birds and animals are there! Birdsong can be heard from everywhere and each song is special and unique. Here you will see ostriches, cranes, colourful parrots, black geese, eagles, pheasants, graceful pink flamingos, peacocks.

On the territory of the reserve you can find rare animals from Asia, Europe, Africa, Australia and America, such as zebras, Indian and African wildebeests, gayals, ankole-watusi, deer, American camels, antelopes, buffaloes, ponies, llamas, as well as saiga – ancient ungulates, peers of mammoths. Steppe is a place where Przewalski’s horses inhabit, which man has not managed to tame: they stick together and in danger they break free. But here animals feel safe as the staff of the Askania-Nova Reserve care about them and protect.

Tourism routes are arranged on the territory of the reserve, that’s why you may choose any you are interested in: to herds of wild animals you can get by a microbus or by a horse carriage; and special path is to lead you to prohibited steppe.

What is the best accessible to the Askaniia-Nova from:

Ecotour Ascania-Nova
You will find yourself in a unique reserve - Askania Nova, where peacocks freely walk around the zoo, and the arboretum has a unique irrigation system. But the most interesting is the huge herds of animals that graze freely in the steppe.