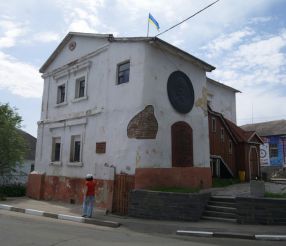 The massive building with two floors and external wooden staircase in Boguslav known simply as "Kamyanytsya" was built for Jewish religious school.

Today, the building is located Museum folk, but it can only visit by appointment.

Kamyanytsya is the oldest building in Boguslav, an architectural monument of the 18th century. In pre-revolutionary times Kamyanytsya was a religious Jewish school Hedera, after the revolution was a club for the deaf. During the Second World War it housed and operated Gestapo, then placed the museum Komsomol glory.

The architectural style of the building is simple. The wall thickness reaches 1.2 m, preserved deep cellars. Kamyanytsya the right side of the road near the entrance to the city, and the building can be seen portrait of Yaroslav the Wise and plaques with inscriptions: "Bohuslav, founded in 1032 by" and "Kamyanytsya. An architectural monument. " Today the building was restored and placed it in the new museum.

Museum "Kamyanytsya" in Boguslav is one of the main streets - Shevchenko, near the city center. Lovers of hiking here you can reach on foot. On the route goes local transport.

What is the best accessible to the Kamenica (Museum of folk crafts) from: