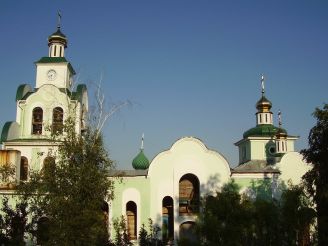 Back in 1622 in a former medical school dormitory in Lubnah placed the Holy Trinity Church.   The temple was the largest in the city. Then the building was completely wooden. That is why in 1869, when the church became quite dilapidated, in its place was built of white stone five-domed temple that stood until 1960. In that year, under the pretext of building a large hotel in the city center   the church was blown up. The ministry also moved to the premises on the outskirts of the city, which was not intended for the church.

At the moment, completely rebuilt the temple in classical orthodox traditions   and it is carried out daily service.

What is the best accessible to the Holy Trinity Church from: