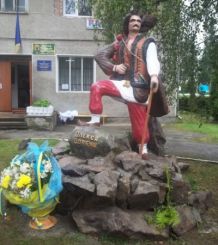 It is said that here, in the foothills of the Carpathians, no such place, mountains, caves, stone, which do not bear the name of the national hero Oleksa Dovbush. Especially revered this hero, people`s avenger, the legendary leader of the insurgent group henchmen, a martyr, in his native Pechenizhyn.

In 1738 he became head of the liberation movement opryshky who were active in the first area and adjacent Pechenizhyn Yablonovsky pass later - almost the entire territory of the Ukrainian Carpathians. They plundered the rich landowners and the wealthy gentry, handing out trophies to the poor. Dovbush tragically died at the hands of the traitor at the age of 45 years, but had become a legend.

At the entrance to Pechenizhyn from Coloma in 1971, it was installed the first monument of Oleksa Dovbush - a bust of the hero with a hatchet in his hand, made famous sculptor Valentin Borisenko.

New Oleksa Dovbush monument erected in front of the historical museum, which bears his name, was inaugurated in the village Pechenizhyn recently as Independence Day August 23, 2014. It was engaged in the manufacture of the famous sculptor village Rungory Alexei Bondarenko - his works are found in many countries around the world. Opening of a new monument was a historic event.

However, only 20 km from here, in the village of Kosmach the Kosovo district, there is another unique museum devoted to famed opryshky, Ataman of the liberation movement. It was founded by Ukrainian ethnographer, researcher of the Hutsul, folk artist, painter, sculptor Mikhail Didyshin-Yusipchuk.

In the 70s he found the hut, once belonged to a certain Pole Stefan Zvonchaku, which served as a refuge Dovbush in the winter, and in which the hero was killed. Michael Didyshin transferred this to his hut in the yard and it was founded in the museum of Oleksa Dovbush, which exhibited more than 500 exhibits dedicated to this hero. In 1988, he also built a museum near the monument to another Olexa Dorvbushu.

What is the best accessible to the Monument Alex Dovbusha Pechenizhyn from: