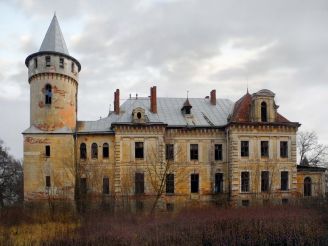 In the small village of Priozernoye in Ivano-Frankivsk region is a two-storey mansion, built in 18-19 in Neo-Baroque style. At that time the village was called Psari. The original palace complex was built in the second half of the 18th century. This house belonged to the Countess Wilhelmina Ray and was raised by her order. In 1880, instead of the old palace was built new. The author of the project was well-known Lviv architect Yu Zaharevich. Opposite the entrance gate of the estate were, from a height overlooking the surroundings. The palace complex was decorated with a landscaped park.

House miraculously survived: in Soviet times the building was used for household needs. Then it housed a psychiatric hospital. During the years of independent Ukraine in the estate was a convent after she was handed over to the Ukrainian Orthodox Church Kiev Patriarchate.

Once the estate was a wonderful park with ponds, but now it reigns desolation. From former beauty were only old trees. Restoration of the beautiful sights not conducted.

What is the best accessible to the Reyiv farmstead from: