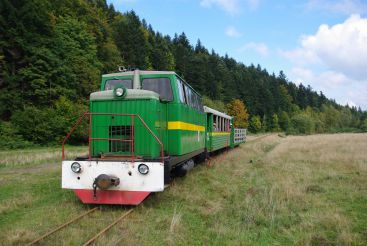 Profitable narrow-gauge railway (track width - 76 cm, standard European is almost twice as wide) was built in the second half of the 19th century to facilitate the export of timber produced in the Carpathian Mountains.

Over the entire period of the Soviet Union not only narrow-gauge continued to use, but it is actively expanding, and after the collapse of the Union of Railways began to decline, largely due to the impact of natural disasters and hunters for metal. More or less survived the road length of 13 km along the river Mizunka. It is on the basis of Mizunskoy railway and tourist route has been created, now known as Carpathian tram.

The tour begins by tram from the village benefit, it runs through the forest belt, the former village of woodcutters Mindunok and ends near the village Senechev in the same tract. During the way through the foothills of the Carpathians scheduled stops near the bridge over the river Mizunku, source of mineral water "Mountain Girl" bog Shirkovets, Mizunskogo cascade waterfall and the station "Oak Kut." Of the thirty bridges in these areas part of four passes.

The cars are different from one another: there is a comfortable fully enclosed car, wagon and convertible on the basis of an open platform for fans to photograph everything and outdoor recreation. In addition, there are 12 seats in the locomotive - for tourists wishing to see the work of the driver.

How to get to the Carpathian tram

Carpathian tram - it`s a great opportunity to admire the beautiful views and even a picnic (this is available at the stations "Mindunok" and "Oak Kut"). You can find the tram at the Ivano-Frankivsk region Dolyna district, town Benefit Street. Factory 4. Departure from the village benefit occur on weekends at 9 am.

What is the best accessible to the Carpathian tram from: