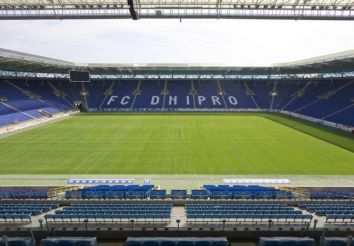 The new stadium "Dnepr" is very similar to the German club scene "Borussia" Monchengladbach. The stadium, which was built on the former site of the stadium "Metallurg", drawn up with all the requirements of FIFA and UEFA, so it is possible to hold matches at any level under the auspices of these organizations. As existing, new stadium is oriented north-south axis. Inside it, there are two video screens of 60 square meters each. The stadium is equipped with artificial lighting for the matches in the evening and at the same time the possibility of TV coverage. Lighting stands made using special lights that are installed on the roof of the stadium. This light has three modes: a television shooting games, no telephoto, training mode.

Stadium can be divided into two parts - the "cold" and "warm" zone. "Cold Zone" - a platform, combining a southern, eastern and northern sector of concrete structures. In these sectors, the audience sat on the individual folding seats, which are imported from Germany. All the seats are covered with a transparent canopy, which is mounted on metal structures. "Warm Zone" - in other words, it`s VIP-building. In the VIP-building includes a tribune for VIP-persons, designed for 293 seats, offices for sponsors, teams locker room, a room for medical examinations of players and referees, doping control room, medical center, gym, sauna with rest room, swimming pool, massage rooms press-bed, closed cabin for the TV and radio reports, club museum, restaurant, buffets for commentators and staff outlets. As for the football field, it is equipped with a heating system and auto-irrigation. Near the stadium placed ball field and parking for cars. Outlets and toilets for spectators placed around the perimeter of the stadium.

Lawn to have enough light, it is not covered canopy. From rain and direct sunlight only protected the stands. Part of this cantilever canopy is made of translucent material MAKROLON, and which will provide a sufficient passage of sunlight. In addition, experts in laying lawn turf laid the necessary quality. This turf is made up of several layers. Bad sectors of the lawn quickly replaced after the match. Now in the world there is a tendency to use artificial turf last generation. Laying the football pitch took Ukrainian company, but in parallel the company «Hochtief» are in contact with Dutch and German experts. This project uses the support of foreign experts. The project of the new arena was designed in accordance with Ukrainian legislation. Therefore, the stadium had to "omit" a meter down compared to the original project plan. The stadium is equipped with a sufficient number of emergency exits. With regard to the passage of spectators at the stadium, when it will be two stages of security control, which was produced by means of fencing systems. In addition, in the area of ​​advertising near the football field there are places for people with disabilities.

What is the best accessible to the Dnipro-Arena Stadium from: