The main train station in Dnepropetrovsk 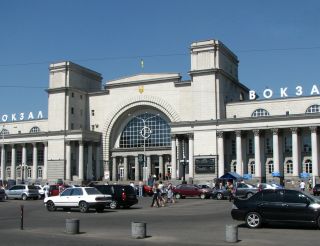 In Dnepropetrovsk has two railway stations - Central and Southern. The main railway station is close to the city center and has a greater number of ways. But the main advantage is its Dnipropetrovsk station building - one of the most beautiful in the city. You do not stay in this doubt if you'll see him in the evening hours. Then the building is illuminated with special built-in lamps, which give it some mysterious greatness.

The building of the central station of Dnepropetrovsk was built in 1884, when the city still bore the name of LOTS. The same name was and the station - "LOTS". However, it was not the first in the province. Initially, in 1873, she worked as a station on the left bank of the Dnieper River in the direction of Lozovo-Sevastopol. When the decision was made ​​to increase the number of tracks and construction of a new station Dolinskaya, the best option was the construction of the Central Station, on the right bank of the Dnieper.

The kind that has a railway station Dnipropetrovsk today is different from the building, built in the 19th century. The fact is that during the Second World War, all the roads leading out of the city, were blown up by the Nazis. A station was in ruins and could not be restored. In 1951, the architect Alexei Dushkin was newly constructed building of the new Grand Central Station in the style of "Stalin's empire." The construction has an oblong rectangular shape. Middle is the main entrance to the interior and to the railroad tracks station. It is styled under the arch, which is completely covered with glass. On both sides of the arch are the two pylons, which are slightly higher than the building itself. They are rooms for servants "Ukrzaliznitsi." On each side of the main entrance located symmetrical right and left-wing station. They are tightly surrounded by huge columns which are crowned deciduous decor in the Corinthian style. There are lounges, cafes, background, box office, and the underpass.

The Central Railway Station is the main but not the only part of the architectural composition of the square named after Grigory Petrovsky. Coming out of the main entrance of the station, on the right you will see the apartment building, which is a distinct addition to the entire ensemble of the square. On the contrary it is a five-story building, which has an acute angle, and gradually turns to the main avenue of the city. Opposite the station building, you will see a seven-story building. Its two-tier structure in common with the structure of the central station. Between these four buildings is an area named after Grigory Petrovsky. From this area you can get to any part of the city by taxi, tram or subway.

What is the best accessible to the The main train station in Dnepropetrovsk from: