In the north-west of Ukraine among the green banks of the River Estuary is located exactly. There is always crossed paths connecting the western part of the country to the east. Exactly because for centuries considered the county town of various powers. This feature is reflected in its architecture, making an appeal to those who want to get acquainted with the historical past of Ukraine itself.

Magdeburg rights and city status Exactly received in the late 15th century thanks to the founder of the city Duchess Maria Nesvitskaya which styled itself as Maria Rivne. However, the first mention of exactly how about the village date back to 1283. From the 15th century until the mid-20th century, the city passed it to Poland, then to Lithuania, it was under the authority of the Commonwealth, it belonged to the Russian Empire.

For today in the city you can see the buildings of different religions and cultures. It has built and the Jewish synagogue, and a Catholic church and the Orthodox churches. All of these sights can be seen on one of the most beautiful streets in Rivne - Cathedral. However, a walk on this small town is best to start coming out of the railway station building on Prospekt Mira. At its intersection with the street Shevchenko is the oldest building of the city - the wooden church of the Assumption. It was established in 1756 by the parishioners. Associated with Assumption temple legend tells that in his mills before the battle with the Polish gentry prayed one of the leaders of the uprising in 1768 Ivan Gaunt.

Next on Prospect Mira is Petliura street on which the amber museum. This museum was opened on the basis of the city amber factory. Here are the different amber rocks, some of them for 40 million years. The museum also exhibits the most ancient amber product - Disc amulet, which has about 2.5 thousand years. Items of the museum are considered amber stones, which crystallized insects.

At the end of Prospekt Mira is Independence boulevard decorated with blooming flower beds and a small public garden. There is a cinema "Ukraine", beyond which is the street Cathedral. Left on Independence Avenue is a park named after Taras Shevchenko. This is a vivid example of landscape art. The park grow different types of flowers, shrubs and old trees. Some of the plants are exotic, as imported from North America, the Far East, Southern Europe, as well as from Japan and China. The park has several ponds and is divided into five zones: the sports sector, children's sector, a quiet rest area, the zone of active recreation and entertainment facilities sector.

Right across from Independence Boulevard built Holy Resurrection Cathedral. It was built in the late 18th century on the donations of Emperor Alexander III and is now one of the main buildings of the town.

If you walk along the street toward the Cathedral River Estuary, then on the left side will Karalenka area on which the Rivne museum. Once there was a man's grammar school, where he taught Ukrainian historian Nikolai Kostomarov and studied the great Russian writer Vladimir Korolenko. During the German occupation of this building was a Reich Commissariat Ukraine headed by Erich Koch, and behind him was located bunker prisoners.

Lined square Karalenka park with a lake. This former estate of the Princes Lubomirski. Previously, there was built a castle in Rococo style, and now preserved only "Swan Lake", which are home to black swans.

On the right side of the street is the Cathedral building Rivne Regional Academic Music and Drama Theatre, near which is a monument to Ukrainian writer Ulas Samchuk. Left as a monument to the founder of the city of Rivne Mary. Behind this monument is located on the street Main Synagogue School of the late 19th century and the Jewish school.

On the outskirts of town is the Rivne zoological park of national importance. On the territory of more than four hectares inhabited about 200 species of terrestrial fauna representatives. In the aviary, "Grandmother's farmstead", which is located within the park, some of the animals you can take your hands and feed. Also at the zoo operates ekzotarium and open a riding school.

Exactly incorporates the characteristics of many western Ukrainian cities, which makes it unique and so attractive for many tourists. 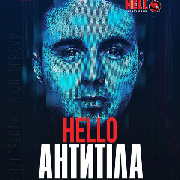