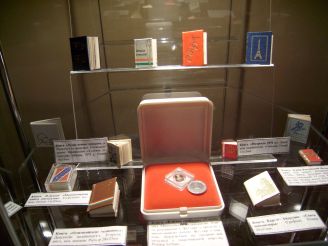 Amazing miniature book museum located in the small town Gorlovka Donetsk region. This is Europe's only museum that not only demonstrates printing talents dozen generations of publishers, but also tells an interesting story of a miniature book publishing in Ukraine and abroad. His collection includes over 8,500 exhibits, including - mini and mikroknyhy issued in 57 countries, 103 languages. The size of these exhibits are impressive!

Gorlovsky museum miniature books named famous collector Benjamin Razumov, who after his death bequeathed all collected over many years exhibits hometown Gorlovka. In 1987, his countrymen collector laid in his apartment a small museum, which soon acquired the status of municipality, in 10 years - the state. And in 2001, the unique collection of exhibits provided a new building in which it remains to this day.

Get to Gorlovskogo state museum of miniature books is quite simple. It is located in the Donetsk region Gorlovka Victory Avenue, 57.

What is the best accessible to the Museum of miniature books from: