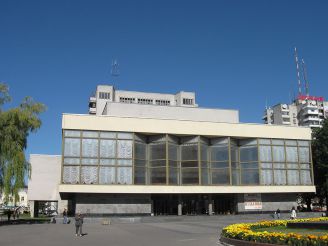 Ukrainian Drama Theatre named after Shevchenko in Lutsk located on Theater Square in the city center. Theatre, created during the war, endured many obstacles, but today can delight viewers interesting performances and performances.

History of Music and Drama

Shevchenko Theatre in Lutsk was founded in 1939 by the decision of the Council of People`s Commissars. At that time, the main creative troupe composed of Volyn theater, acting to create theater, the head of which Nicholas was certain. Over time, the total number of fans began to join professional actors from other Ukrainian theaters.

During the beginning of the war theater ceased activity, but with the advancement of the eastern side of the front, he reopened.

By 1972 the theater was directed by Boris Lurie, Kazakh SSR artist. By the time the active work of the theater, were staging performances:

The rapid development of creative theater for a short period of time to achieve recognition as spectators or professional critics. Shevchenko Drama Theatre begins tour not only Western Ukraine. By the 75th anniversary of the Holodomor play "forgive and have mercy" presented in 23 regional centers of the state. Shevchenko Drama Theatre successfully represents Ukrainian theater and abroad, particularly in Poland and Belarus.

Drama Theatre named after Shevchenko has a large chamber and stage. The small chamber scene umischaye 50 seats, designed for large 775. For fruitful years of activity in the theater were presented many performances, plays and performances, which have gained recognition viewer immediately after the show. The most famous of them are:

Drama Theatre named after Shevchenko is on Theater Square in the center of Lutsk. Next is one of the main streets - Prospect Will. Driving directions can be many bus, near the bus stop is "Hotel" Ukraine ".

What is the best accessible to the Drama Theatre. Shevchenko from: