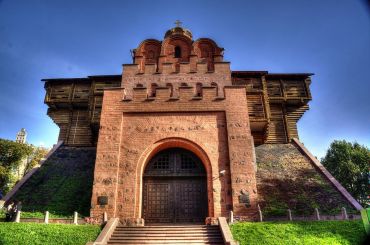 Unique architectural monument, which came to us from the times of Kievan Rus - "Golden Gate" - was built in the early 11th century. The height of this defensive structure, built in the form of a tower with a wide gate, reached about 10 meters.

Front gate of Kiev were built in the time of one of the brightest of the rulers of Russia - Yaroslav the Wise. The main task was the defense of the main entrance to the city from the Mongols. Therefore, the gates were reinforced, fabricated using stone, baked clay. Somewhat later on defensive works appeared Church of the Annunciation.

Experts have not come to a consensus, why is the goal, in the manufacture of which has not been used gold, was given this name. According to one version, the "gold" they were called because of the copper trim, which gave a glimpse when she was in direct sunlight. Another suggestion - the name is associated with Constantinople Golden Gate, through which, in Jerusalem , Jesus went up.

Kiev Golden Gate still could not resist the onslaught of the Tatars. But over time, they have restored. In the 20th century in Kiev, a pavilion, a museum dedicated to the history of this defensive structure. It was there, in the sarcophagus, is part of the gates themselves have chosen to keep for posterity.

What is the best accessible to the The Golden Gate Museum from: