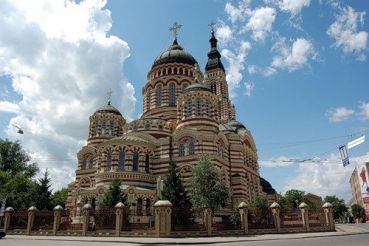 One of the main attractions of Kharkiv is Annunciation Cathedral. For many years, it has amazed residents and visitors with its magnificence, power and beauty. Golden domes, 80 metres high, create a unique feeling of grandeur, towering over the visitors.

The Annunciation Cathedral history dates back to the Kharkiv founding day. The first construction made of wood was rebuilt for several times. Today you can see the stone church as it was projected by architect Mikhailo Lovtsov in the 19th century.

Without fear of experiments, the architect has planned the church as a hemispherical building of massive volume within the Byzantine-Russian style with elements of Eclecticism, elegantly harmonizing with a storied belfry in the Gothic Revival style. The unique cathedral shape is emphasized by a wide variety of details, as well as facades decorated with polychrome alternation of wide horizontal rows of red bricks and light-coloured stucco.

After the Revolution, many attempts to close the church were made. In spite of the fact numerous Orthodox organisations have stood up for this great shrine, Annunciation Cathedral was closed in 1930, and its territory was occupied by a storehouse of oil products, and a stable. However, after three years worships in the temple were resumed and in 1946 the temple became the diocesan centre and the cathedral church.

Many pilgrims from different countries tend to visit this holy place and worship the relics of Constantinople Metropolitan Athanasius, Archbishop Meletius of Belgorod and Martyr Alexander, an Archbishop of Kharkiv. Amazing atmosphere reigns in the church not only during holidays, but also during quiet everyday services.

The temple has repeatedly suffered from damage. Violent storms of1974 and 1996 considerably destroyed the cathedral, and the fire of 1997 damaged a belfry cross. But thanks to the efforts of priests and the faithful, the church was completely restored, and now its cross shines greater than ever.

To commemorate the 335th anniversary of the Kharkiv founding, a miniature of Annunciation Cathedral has been placed on Arkhitektoriv Square. White marble has been used to create this monument of three tons weight, in addition its dome crosses have been made of bronze.

To get to Annunciation Cathedral you should take the subway till Tsentral’nyi Rynok Station. Or you can take bus №246 on Chervonoarmiys’ka Street located near the railway station. If you go by car, you should follow Poltavs’kyi Shliakh Street, and then turn to Enhel’s Street.

What is the best accessible to the Annunciation Cathedral from: