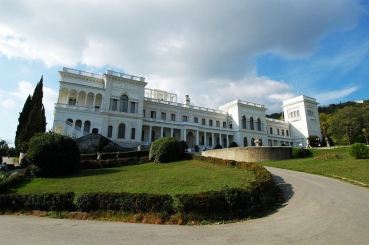 On the southern shore of Crimea in a little town Livadia a beautiful snow-white Livadia Palace is located. The name Livadia came from Greek and it means “grassland”. Many years ago there were large grasslands and on the territory of Livadia Greek settlement was located. In the 19th century one of the richest magnates of that time, Lev Potots’kyi, bought the territory of Livadia. By his order a great park and a fruit garden were found there, interesting plants from exotic countries were brought for that. Later Russian emperor Alexander II bought Livadia for his lovely wife and built there a beautiful palace. Then this palace came to Mykhola II. Thanks to very gifted and famous architect Mykolai Krasnov, who was great at different architectural styles, this palace has become a real masterpiece.

Once you have seen this snow-white palace, you’ll be impressed with its unusual, refined architecture and interesting view of white building against the background of an old green park. Magnolias, sequoias and blue spruces make this place exotic, and sunny fields create atmosphere of fairy-tale. Densely planted trees might open you a picturesque view of the Black Sea shore. You’ll feel lightness and light-heartedness. The main entrance of the majestic palace is designed with columns of white-blue marble. Russian and Italian masters decorated white columns with fine artistic carving. Your attention will be attracted by big vases with Ural semiprecious stones next to the entrance. You might feel a great wish to come inside and see the interior beauty of this majestic building!

The Livadia Palace has 58 rooms. The famous White Stateroom shouldn’t be missed by you. It is a place where the “Big Three”, heads of three union states the USA, the USSR and Great Britain, have met to discuss conclusion of the Second World War and guiding political principles of postwar reorganization. At the Yalta Conference “the Declaration of Liberated Europe” was signed. This room represents atmosphere of February 1945. There is a long table in the middle of the room, where Joseph Stalin, Franklin D. Roosevelt and Winston Churchill discussed important questions. It is the same floor where showy dining room, vestibule, waiting room, emperor’s room and billiard room are located. On the first floor you can see rooms of the czar’s family made in the style of Modern. They are of a great art value. The walls of these rooms are decorated with canvas of Alexandre Benois and Fedir Volkov. You’ll see the furniture that was made of materials so they would fit interior of each room.

Your attention will be attracted by two inner yards – Italian yard and Arabic yard made in the Oriental style. In the centre of Italian yard you’ll see a little fountain. You’ll notice an interesting sculpture of mythical personage with a snake’s tail, a goat’s trunk and a lion’s mouth. In the Middle Age it was believed, such sculptures gave good fortune, protected from evil spirits and different illnesses. We must point out there are many such things in the palace. About 750 icons decorate interior.

Church of the Exaltation of the Holy Cross, a real architectural gem, will be noted by you next to the palace. It was built in the Byzantine style and decorated with wood carving. Over the entrance you’ll see an icon of Archangel Gabriel.

Today the Livadia Palace is a famous sanatorium and precious museum of art and architecture, where you might feel remote past. While walking along czar’s paths in an old park you’ll get real pleasure and unforgettable impressions!

What is the best accessible to the Livadia Palace from: