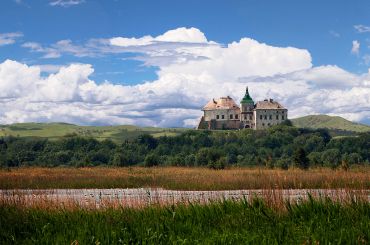 On the high hill, which slopes rise above boggy meadows of the Libertsiya River, one can see a powerful stronghold – Olesko Castle. The ancient castle was built in the early 14th century. It is believed, the castle was built by one of the sons of Yuri I of Galicia, King of Galicia-Volhynia.

Olesko Castle was situated on the border between Poland and Lithuania, being a cherry on the pie for Poland, Ukraine and Lithuania. For years the fortress has played an important defensive role. In the second half of the 15th century the castle lost its defensive importance and turned into a magnates’ residence. The stronghold gradually obtained shape of residential buildings with elements of Italian Renaissance. Later, Ivan Danylovych, a rich Ukrainian landowner, bought the castle, therefore defensive walls were harmoniously combined with newly constructed buildings. In 1681, the castle passed into the hands of Polish King Jan Sobieski, being later renovated and completed with new built utility rooms.

The 19th century was a particularly difficult period for the castle, however it resembles a fabulous Phoenix – it constantly regenerated, raised from the ruins. Today, the castle is restored within elements of the 17th century.

Olesko Castle is full of secrets and interesting legends. Some people believe ghosts roam about the castle. According to a legend, the spirit of Jan Casper, a Czech monk, inhabits the castle. Once upon a time Casper attended service on the St Anthony’s Day, but suddenly in front of a thousand pilgrims he jumped into the well and this was recorded in the castle’s chronicle. And today, his soul wanders the corridors searching for eternal peace. Also, they say at night you can see two shadows wandering halls of the castle. They are souls of lovers trying to find each other among echoes of their voices.

Olesko Castle is well known due to the fact the mighty King of Poland Jan III Sobieski was born here, as well as the strange legend about his birth. The future king was born during a terrible storm while Tatars attacked the castle. When a midwife put the baby on a black marble table, suddenly the thunder struck, therefore the table cracked and the midwife became deaf.

Today the castle is a part of the L’viv Art Gallery. Each room is a kind of museum exhibit with its striking interior: wallpaper, furniture, walls, floor, and lamps – turning you back to the 16th-18th centuries. Wall carpets made of wool or silk threads called tapestry will attract your attention, specially the tapestry depicting a very interesting story of Homer's poem "Odyssey".

In the museum you will see old iconostases, a collection of icons C15th-18th, and a great painting of Martin Altomonte "Battle of Vienna", which was painted by order of King Jan III Sobieski. You’ll be impressed with a unique collection of wooden sculptures C14th-19th as well. Sculptures of Johann Pinsel "Samson wrestling a lion" and "Sacrifice of Abraham" are worth seeing, as you might feel their emotional ambivalence: a man is powerful, but at the same time helpless before the power of nature.

For a long period of time the territory of Olesko Castle served as a platform for movie studios of Ukraine, Belarus, Russia and Poland. The heroic defence of the stronghold from Polish invaders in 1431 was used as a basis for the opera "Olesko ballad" and the novel "Cherlene vyno" of the famous L’viv writer Roman Ivanychuk.

What is the best accessible to the Olesko Castle from: