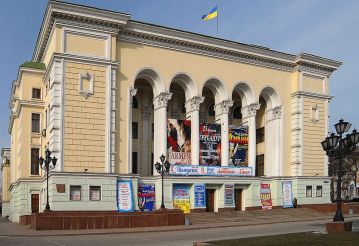 Donetsk Opera and Ballet Theatre is one of the main attractions of the city and over the years of its existence, has received recognition and love not only the residents of Donbass, but many visitors to this region.

The history of the theater began in 1941. The first season opened with the premiere of Glinka's opera "Ivan Susanin". During World War II, part theater of the corpses had been evacuated to the Kirghiz SSR, the village Sazanovka. Later he continued his theater work in Przheval'sk where actors not only put the new performances, but also had an active concert career in military units and hospitals.

In 1977, for outstanding contributions to the development of arts theater was awarded the title of "academic". In the 90's of last century, when the theater was created renowned dance school, which was headed by People's Artist of Ukraine Vadim Pisarev. Within the walls of this famous temple of culture on a regular basis since 1992, runs m he International Festival "Stars of World Ballet" in which the dancers are constantly involved at the highest level.

The theater building was designed by Ludwig Kotovskogo. Manual work was carried out on the excavation of the pit, which was planned to accommodate large garages. Later these areas were placed under the production shops. In the best traditions of classic architecture designed facade of the theater, which has free approaches from three different angles. Attract admiring glances visitors extraordinarily beautiful decorated lobby and ceiling. The walls are decorated with fine stucco products. The auditorium of the theater is designed for 976 seats on the mezzanine and balcony are placed busts of famous playwrights, composers and poets. The solemnity of these zones highlight the splendid decorative vases. Area mechanized stage is 560 square meters, it is able to withstand up to seventy-five tons of load.

Near the theater building you will see a monument Anatolia Solovyanenko. Near a large undeveloped and convenient car parking. Get to Donetsk Academic Theatre are by taxi number 2 to the stop "street Gurov," bus number 2 or bus number 2.

What is the best accessible to the The Anatoliy Solovianenko Donets'k State Academic Opera and Ballet Theatre from: