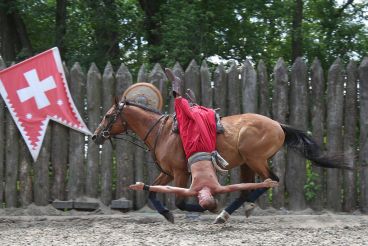 Near the city of Kiev on the Dnieper River is the island of Khortytsya. In the early 16th century on the island of Khortytsya formed a large group of free warriors who called themselves the Zaporozhye Cossacks, and the island - Zaporizhzhya Sich. Cossack army played a major role in the formation of Ukraine as a free nation. They defended their homeland from the Tartar hordes, Polish oppressors, Swedish and Russian invaders. They had their own political system, its economic system and their cultural traditions.

Today the island is Khortytsya layout Cossack settlement real sizes, as well as a museum dedicated to the history of the Ukrainian Cossacks, which presents a large number of subjects of his life. Here in the 90s of the 20th century was created equestrian theater, which was named "Zaporizhzhya Cossacks." However, the history of equestrian Zaporozhye regiment began much earlier. In the early 20th century the Cossacks took part in the battles of World War I and the Civil War.

Equestrian theater "Zaporozhye Cossacks" - a folklore-ethnographic ensemble, which is located on the south-east of the island of Khortytsya. Modern Cossack organization is engaged in staging spectacular views for locals and visitors alike. Actors perform various gymnastic and acrobatic exercises - Vaulting. Staging includes elements dzhigits - stunts on horseback. Everything is done in the form of games and competitions. For equestrian theater performances selected thoroughbred horses, Cossacks clothed in traditional costumes, medieval weapons use. And, of course, on the national Ukrainian folk music instruments executed. When speech "Zaporozhye Cossacks" gives the impression that you were in the old days, when sechevikov trained their riding skills.

After the presentation, participants equestrian theater arrange lessons for viewers. Experienced instructors teach driving everybody else, regardless of the level of training. Theatre also organizes horseback riding, scenic corners of the nature of the island Khortytsya. If you are a professional rider, you can take a horse for hire.

Cossack settlements on the territory are craftsmen in pottery and blacksmith who can make souvenirs for you right before your eyes. Here you can also taste the dishes prepared according to old Ukrainian traditions.

Visit the natural reserve "Khortytsya" historical and cultural complex "Zaporozhye" with the performance of equestrian theater will not leave you indifferent.

You can reach the island from the center of Zaporozhye, where taxis run regularly on Khortitskiy estate - Baburka. In itself, however you can get Zaporozhye from the bus or train station almost any city of Ukraine.

What is the best accessible to the The Zaporozhian Cossacks Horse Theatre from: