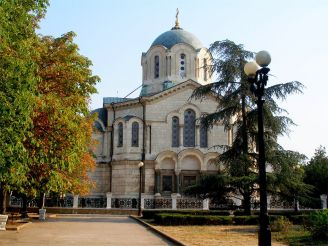 St. Vladimir`s Cathedral is one of the most important historical and religious monuments of Sevastopol. Initially, the construction of the cathedral was planned in Kherson, but at the request of Black Sea Fleet Commander Admiral Peter Lazarev temple was built in the center of Sevastopol.

Construction of the cathedral was conducted over several decades. In 1842 began the preparatory work, and laid the foundation of the cathedral. During the Crimean War, when the heroic defense of Sevastopol Admirals died, the Black Sea Fleet, and their remains were interred in the unfinished church.

In 1858 the construction of St. Vladimir`s Cathedral continued, the author of the project was well-known architect Alexey Avdeev. The temple was decorated in Byzantine style and considered one of the biggest Russian cathedrals. It was a one-dome building, whose facade is decorated with triangular shaped gables, intricate arches and graceful columns made from the Crimean marble.

The interior of the cathedral still amazes parishioners its grandeur and luxurious interior. Marble walls, filled in maroon, interspersed with beautiful murals. Particularly attracted the attention of murals "Transfiguration of Christ" and "Epiphany." The author of the image of the Savior, which is located in the central part of the building, was the great Russian artist Ivan Aivazovsky.

Note the dome of the cathedral, its diameter is about 10 meters. Real decoration of the temple is the body of the song "Holy Spirit." To date, the cathedral is one of the tallest buildings in Sevastopol, its height is more than thirty-two meters.

What is the best accessible to the St. Vladimir's Cathedral from: