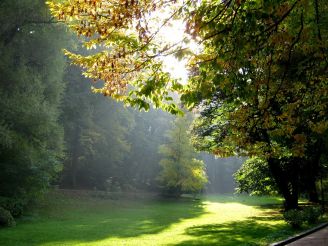 Beautiful old park Stryiskyi Lviv is located on a vast area of ​​55 hectares. It was founded during the economic prosperity of the city. Famous architect Arnold Rering drafted a park that connects the railway station to the main thoroughfare of the city - Stryiska street. In the vastness of the park to be located exhibition halls, which was done in the mid-1890s.

To the railway station "Persenkovka" (which was connected Stryiskyi Park) comes more exhibits from foreign countries. Popular exhibitions were held until 1922 and they were called "Oriental bids." At the same time, for the convenience of visitors are held the line elektrotramvaya. A little later, in the mid-20th century, the line was converted into a children`s railway are active to this day.

Stryiskyi park more than once rebuilt and updated to the needs of the city, at different times, there were military facilities, exhibition of agricultural equipment, sports facilities. Now the park is in excellent condition. In the 1980s there were large-scale reconstruction and brought dozens of species of rare trees and exotic plants. Among them, magnolia, tulip tree, red oak, Aran and more. The picturesque landscape complement manicured pond with a statue in the middle, a fountain, alleys and interesting architecture, which is actively recovering from the beginning of the 2000s.

What is the best accessible to the Stryiskyi Park from: