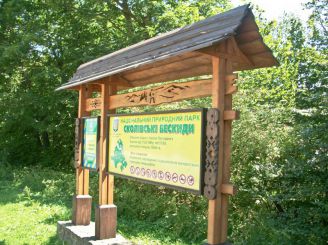 Scenic Park "Skole Beskids" spread in the southern part of the Lviv region. These unique natural sites cover an area of over 35 hectares.

Caught in the wonderful world of spruce-fir forests, you can walk down to the waterfall, which was formed on the River Kamenka, or enjoy the quiet forest lake Crane, around which grew the whole plantation lingonberry! The lake itself is called dead, because of the high content of hydrogen sulfide in it no inhabitants.

In the park there are numerous mineral springs, healing power which can experience for yourself anyone. And, of course, can not ignore the walled city "Tustan" . Remains of a medieval defensive structure lost in the reserve, named after her. Here jousting competitions are held annually and historical reconstruction.

Incidentally, in the National Park there is a corner, which is well known to fans of ski holidays - Tysovets tract . And for those who prefer to walk among the quiet of the forest provides walking routes. They have a different level of complexity, there are a total of eleven. You can make a horse ride or drive a car.

You can get to the park along the road Kyiv-Lviv-Chop, which runs through the reserve. In addition, before Skole can be reached by train on the railway branch of the Kyiv-Lviv-Uzhgorod.

What is the best accessible to the Skole Beskids National Park from: