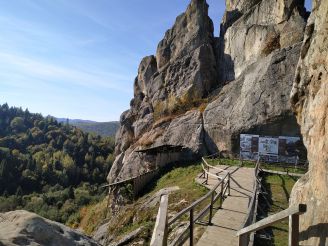 Impregnable fortress Tustan, who grew up among the rocks, rising sorokametrovoy sandstone. Four centuries it harrows borders from invaders until they were destroyed by Tartars. Now the remains of the medieval castle can be found in the reserve that bears her name.

Experts have developed a graphical model of the fortress. As it turned out, this ancient Russian facilities include 5 floors and ground defensive walls reach 15 meters! Struck by scientists and the way in which a high level of development, our ancestors had in construction, which created such a complex water system of the city.

In our times, the territory of the walled city is battle-axes, men`s rings, tips for bows and crossbows, vintage items, made of bronze. A ladder, caves, tombs and podskalnye corridors are of considerable interest among the visitors.

Excursions to the famous castle of the exercise of such cities as Morshyn, Truskavets , Bukovel, Skhidnytsya. Own car, you can get on the highway Kyiv-Chop or resort Skhidnytsya.

By the way, relatively close to the Tustan are a few sites that provide interest for tourists. For example, the cave monastery in Rozhirche , lifts and mountain Trostyan High Top, ski resorts (Tysovets, Slavskoe).

What is the best accessible to the State Historical and Cultural Reserve "Tustan" from: