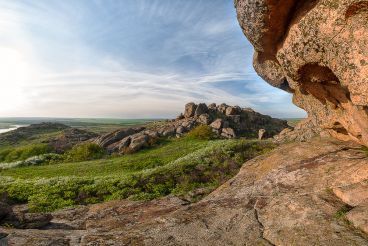 The reserve "Stone graves" is considered one of the best historical and natural monuments on the territory of Ukraine.

The reserve was founded April 5, 1927. This powerful rock middle of the steppe. How is it possible? Many years ago this place was a volcanic eruption, and on the surface of the earth forever frozen rock granite gray, black and pink, which is extremely rare. Unique granites of this mountainous country have no analogues in the world on the chemical composition and physical structure.

The value of the reserve "Stone graves"

The reserve "Stone graves" is located near the village Nazarovka Donetsk region. Scientists were able to determine what hosts various religious rites representatives of ancient catacomb, carcass and yamnyh cultures and civilizations. It found burial mounds around the perimeter of the reserve.

Some historians suggest that it is held on the reserve battle on the Kalka (31 May 1223) between the army of Prince Mstislav Romanovich and the Mongol-Tatar hordes. Here we erected a stone cross and a chapel in memory of all those who fell in this battle. In addition, the "Stone Grave", there are also various legends and stories.

Through a variety of conditions in the reserve there rock, steppe vegetation and archery.

The reserve "Stone graves" is a tiny mountain country, there is found the tastiest water on the territory of the Azov Sea. This is a very popular place for tourists, especially a lot of visitors in the spring when everything is blooming in the desert. Then open the indescribable landscapes, which become the inspiration for the writing patterns. The reserve is imbued with the spirit of previous cultures and is able to take us to ancient times.

Sami graves are a rocky outcrops at a height of 50-70 meters above the steppe and belong to the Ukrainian crystalline shield. "Stone grave" presents five different tops with specific characteristics and properties.

Due to the unique climatic conditions, there is a rock in the reserve, steppe and meadow vegetation. According to various sources, there are about 468 species of plants. There are plants that are listed as endangered. Here you can see endemics - species of animals and plants, representatives of which live in a relatively limited area. Also, there are growing plants that are not typical for this part of Ukraine. Among the animals here can also be found rare species. In the reserve there are about 3,000 species of insects.

How to get to the reserve "Stone graves"

To reserve, you can drive on the highway Mariupol - Zaporozhye Volodarskoe to the village. Then turn in Nazarovka and on a dirt road to get to the reserve. You can also use a regular bus Mariupol - Kalchinovka. From the station Rozovka Zaporozhye region Nature Reserve can be reached in two hours.

What is the best accessible to the Stone Tombs Reserve from: