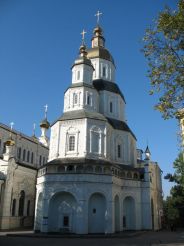 Holy Protection Monastery - the heart of Kharkov, one of its main architectural relics. Founding date of the monastery is 1726. It got its name from the Church of the Intercession of the Holy Virgin , who is considered the oldest stone building in Kharkov , and the crown of Ukrainian architecture of the 17th century.

Visitors to the impression that the temple, bred in a picturesque corner, hovering over the valley of the rivers Lopan and Kharkov. In the courtyard of the complex, surrounded by green, you can see the monuments erected to the 200th anniversary of the founding of the diocese of Kharkiv and in honor of the 2000th anniversary of the birth of Christ. They appeared after the renovation of the Pokrovsky monastery. With unique exhibits that tell the history of the diocese, can be found in the Church History Museum. At this point in the territory of the monastery complex are seminary and diocesan administration.
The main relic of the monastery has long been considered Ozeryanske icon of the Virgin, which protected the city of Kharkov and all Sloboda Ukraine. However, in the 30s of the last century it was lost. Even in our time was able to restore the true image, now it is in the territory of the monastery complex in Holy Cross church. The icon continues to miraculously heal parishioners.
Also in the monastery are stored such shrines, like Kyoto with the holy relics and stones from the Holy Land, the relics of Saint Joasaph Belgorod, prototype Eletskaya-Kharkov icon and a list of the miraculous icon of the Virgin "Vsetsaritsa", which applies to those who are suffering from serious illnesses.
Check out hotels nearby

What is the best accessible to the Holy Intercession Monastery from: